This Panama City and Tocumen Airport spotting event article is kind of long and thus is divided into three (3) parts. You are about to start reading part three (3). Choose here any other part you may want to go to: | One (1) | Two (2) |

The event described in part two, the main reason why I went to Panama on that weekend, lasted from noon until it became dark.

Nonetheless, I did some things in the morning that day, and in the night once it was over.

In the morning, before the event, we went to the old quarter.

Before reaching the place, once inside the city, we had to wait for a moment for the firefighters in procession to pass.

Panama City’s old quarter is a UNESCO world heritage site. It was the place where they moved the city to when the original was destroyed by the pirate Henry Morgan.

They believed the new place was going to be better protected against such attacks, were they to occur again.

There are many historical buildings in the old quarter of course, many of them of a religious nature. 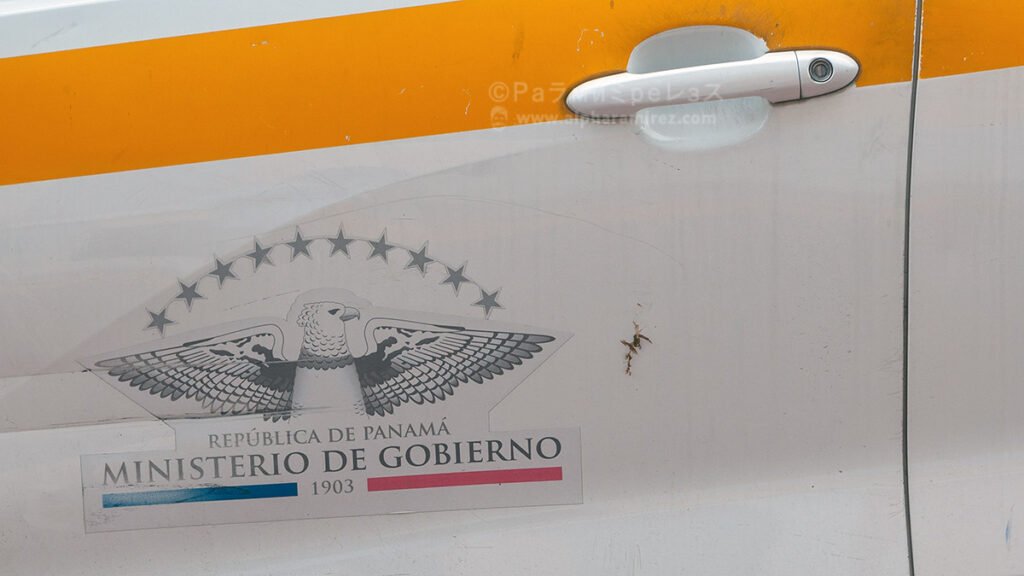 One of these places is the Plaza de Francia (France Square). It has a big statue with the rooster, the french non-official symbol.

The place exists in honour of France, as they were the first to try to build the Panama Canal. They didn’t make it, but they’re remembered by that one try, quite Quixotic in its time.

And of course, there were several French cars of their diplomatic corps accredited to Panama. You can see them with the CD plates of “Cuerpo Diplomático” (“Diplomatic Corps”).

From the old quarter there is a nice view to the modern city buildings, to Ancon hill, the bridge of the Americas, and even further to Amador and the Biomuseo.

You can meet the sea straight from its streets, there were some local kids bathing. My friend told me there are some recovery projects, but that he wouldn’t bathe there for any reason, at least not yet. 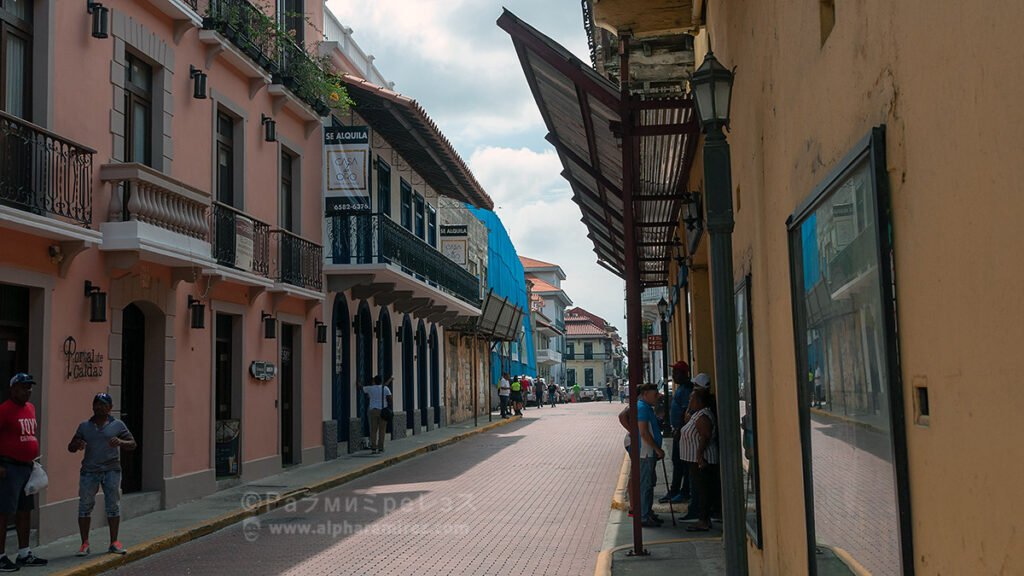 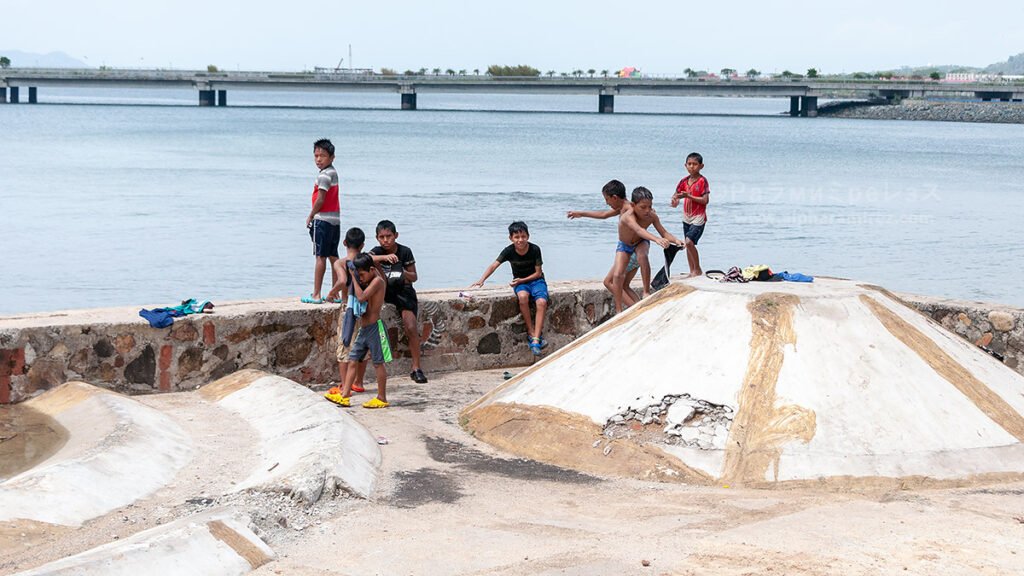 Speaking of this, the old quarter is also the home of regular citizens. There was a time when it was not taken care of, and was kind of a dangerous place.

With the recovery projects that have been undertaken, many of those citizens have been forced to leave because the sector has become expensive -it has gentrified-, and there are tensions between these historical inhabitants and the authorities because of the new realities.

When I was there, they had some cultural manifestations as well, and Chinese tourist groups on top of that. Perhaps they arrived in the Air China flight.

I also saw another group of Russian tourists, I stayed there listening to the guide just to hear the language. But Aeroflot doesn’t fly to Panama, so no idea.

I saw many kittens walking around, or covering in the shade. I liked that very much. 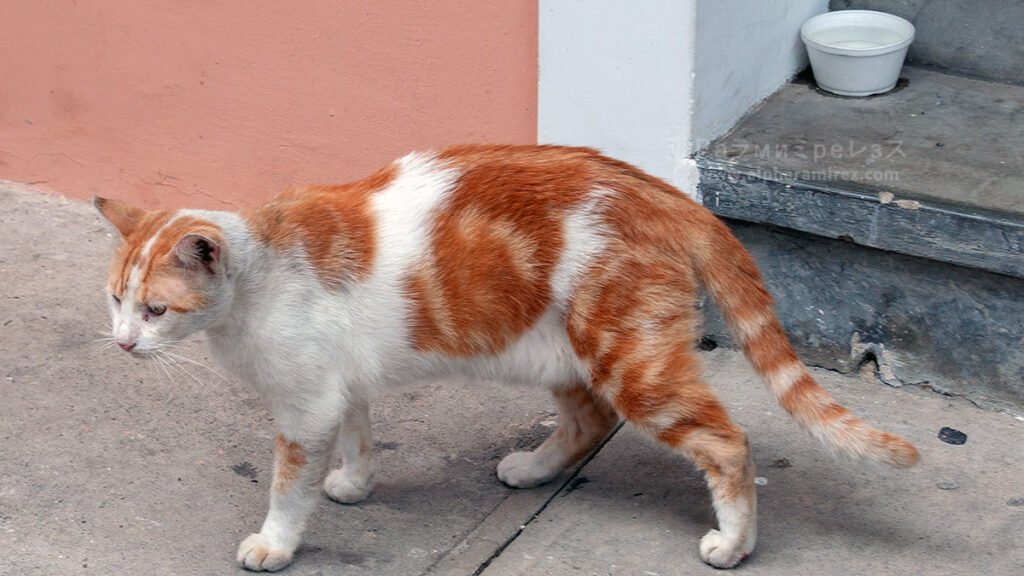 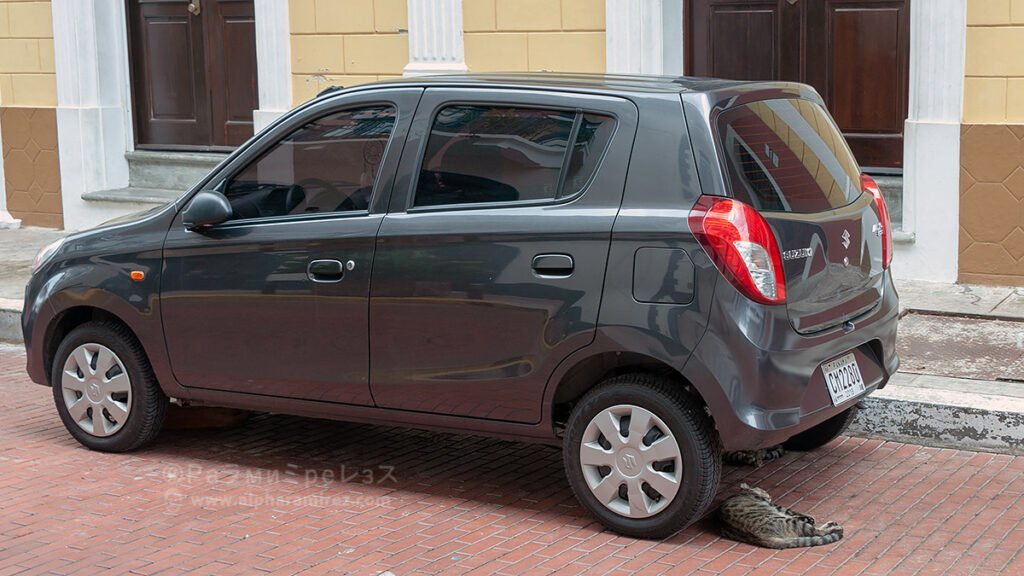 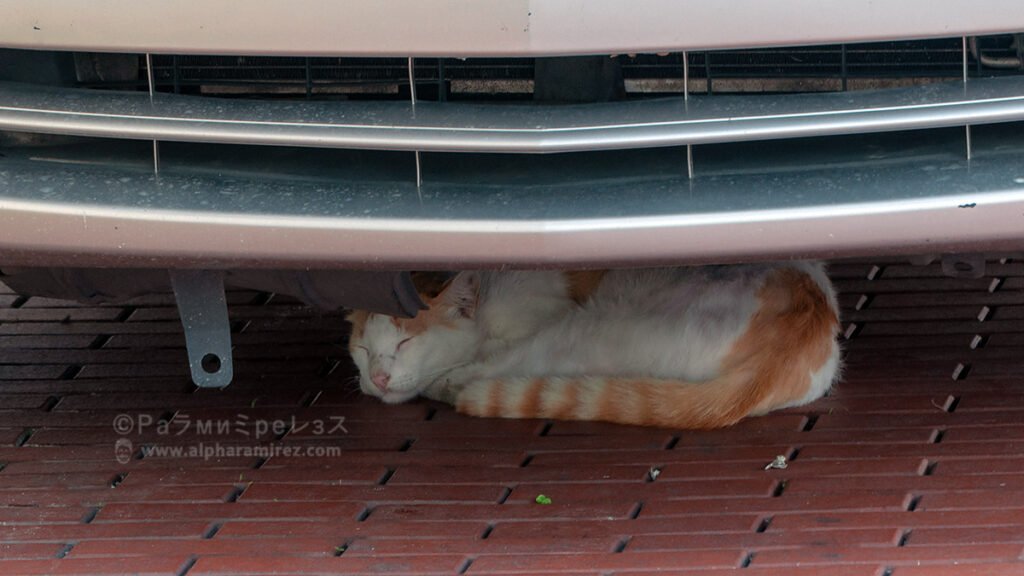 Some of the events that ended with the separation of Panama from Colombia took place there in the old quarter.

I felt a delicious aura with the smell of a decision well taken, and I was very happy with great sushi-wine-mandala energy, because the best thing you can do with Colombia is to get rid of it.

Kudos for Panama. The plaque says:

-“From this place in November the 3rd 1903 the Captain Raul Chevalier made the cannon shots that forced the gunner vessel Bogotá to abandon our waters consolidating our independence that way”.

We continued, and it was time now to eat something and be on our way to Tocumen for the event.

We ate right there in the old quarter, sushi precisely (but not wine).

On our way out we were dazzled by this gentleman that was skating fast and furious, until he fell, hit himself, and this wheel flew away downhill.

I don’t confirm, nor deny, having laughed my arse off.

We started our journey to Tocumen then, and reached right in time to begin all that I described on part two.

Once the event finished in the night, we went to take a look around the cinta costera. I quite like to see cities with skyscrapers at night, one of the best views I’ve had of the kind has been Hong Kong.

And well, Panama City that night wasn’t bad at all.

We arrived, and after parking beside Sabrosón 7 (“Tasty 7”), we went for a walk.

The view didn’t disappoint at all. There were lots of people viewing, but there was space for everyone.

There were many couples too, and a police bike would pass by to check.

My friend told me that since it’s so dark, couples get naughty in public, and then the police must constantly pass to rein in those events.

After a couple of hours looking, taking photos, and speaking bullshit, it was time to leave. It was kind of late, so mush so, that some of the buildings were already turning off the decorative lights.

I had to wake up very early the next morning to return anyway.

While leaving, I saw another kitten walking around. I thought it was the best (again).

More photos of the old quarter and the cinta costera at night, in the following gallery: 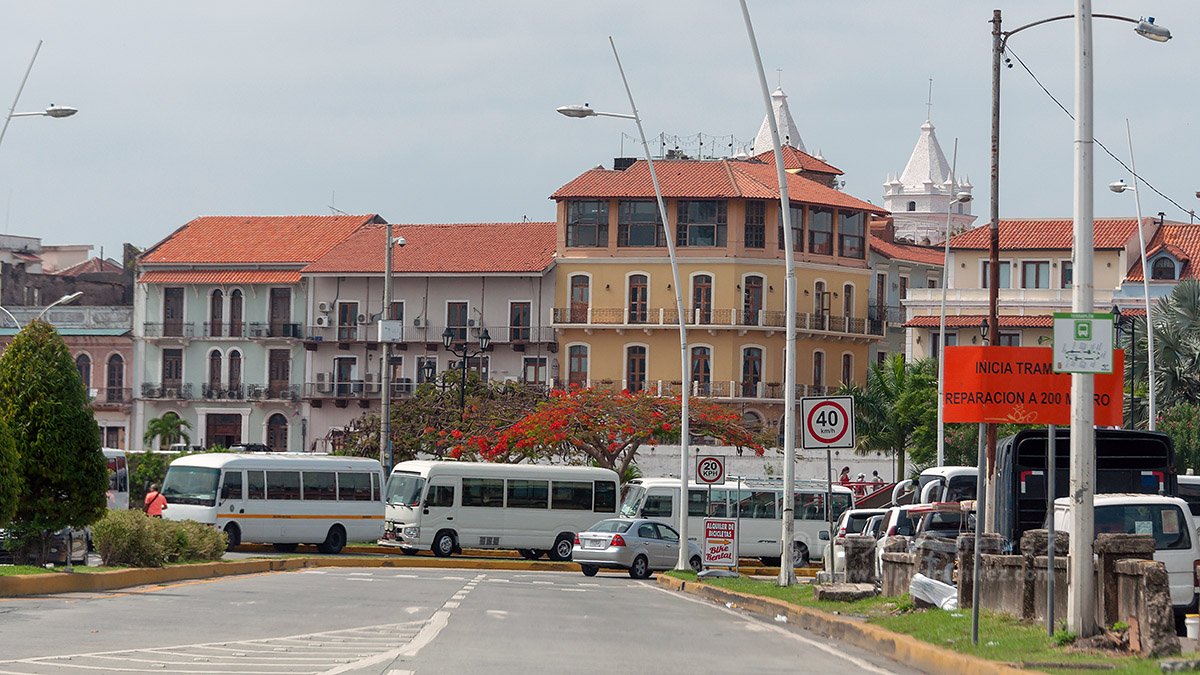 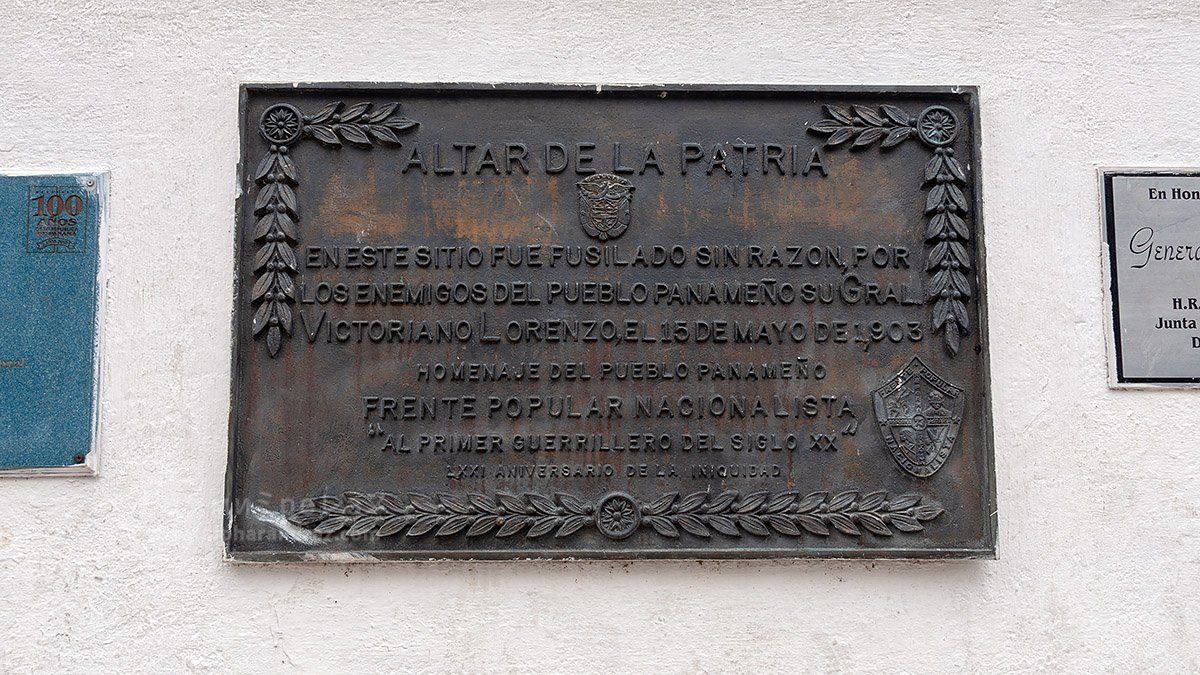 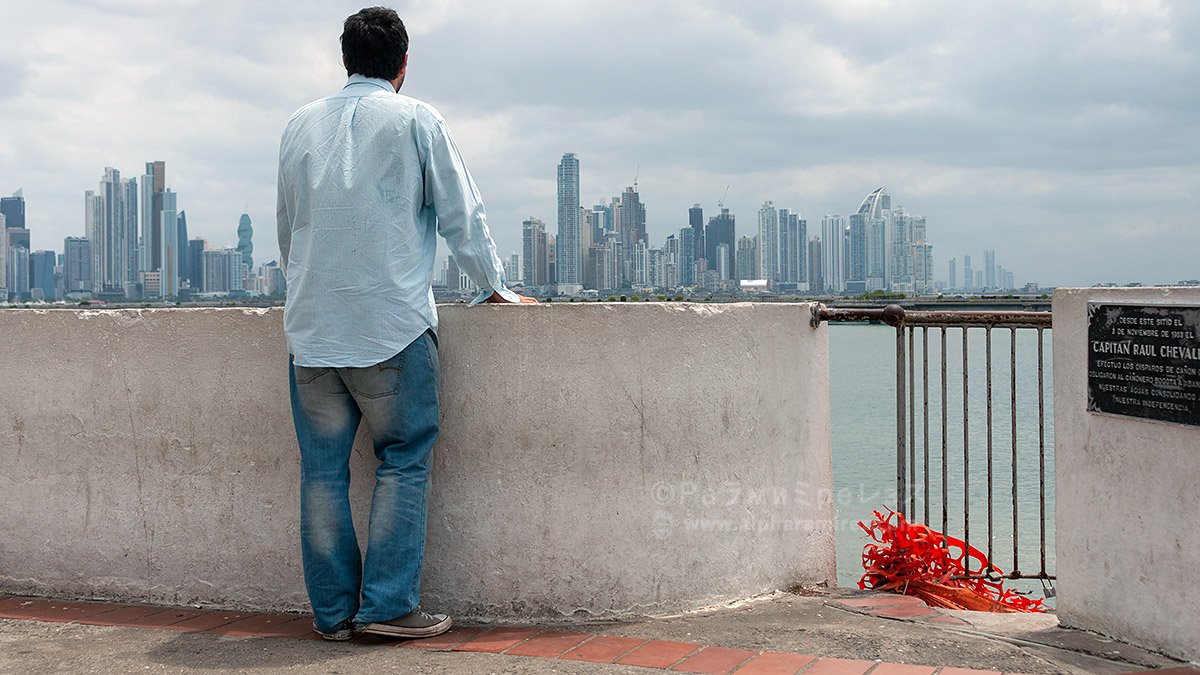 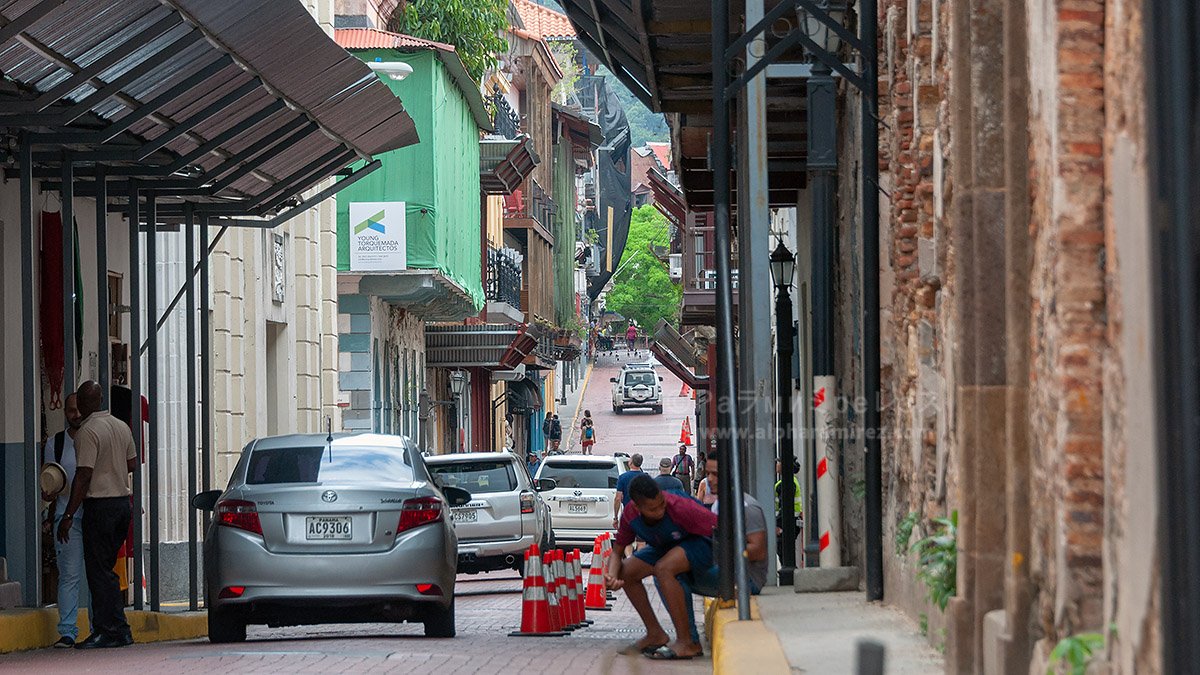 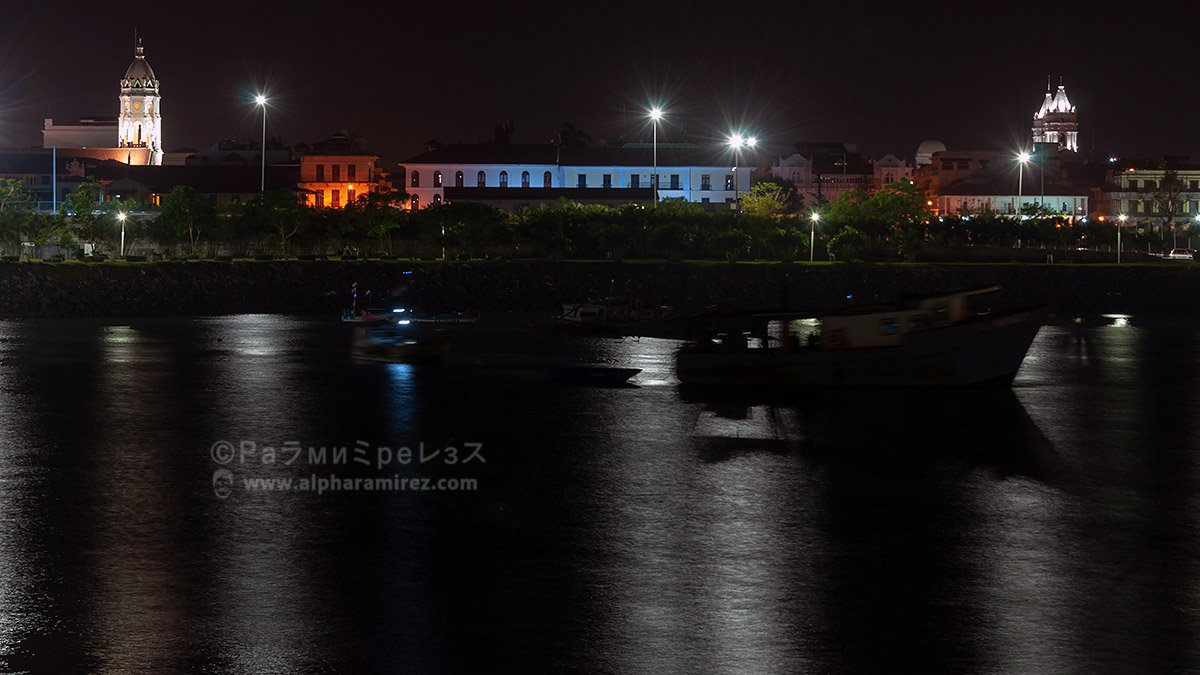 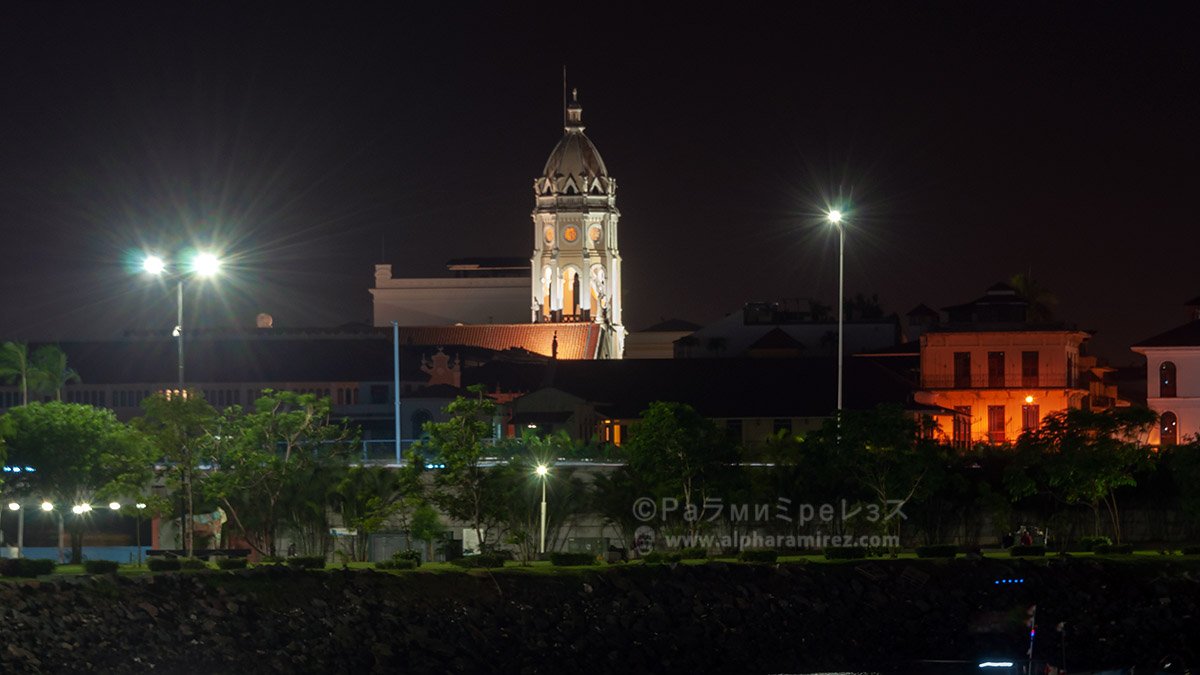 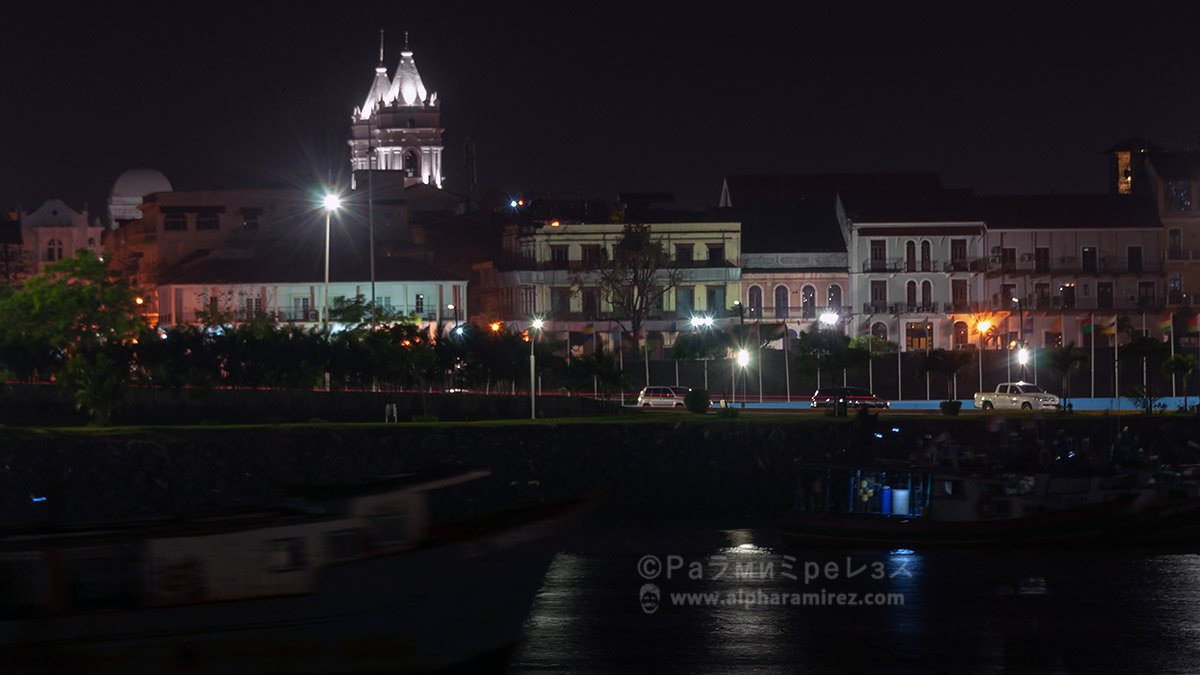 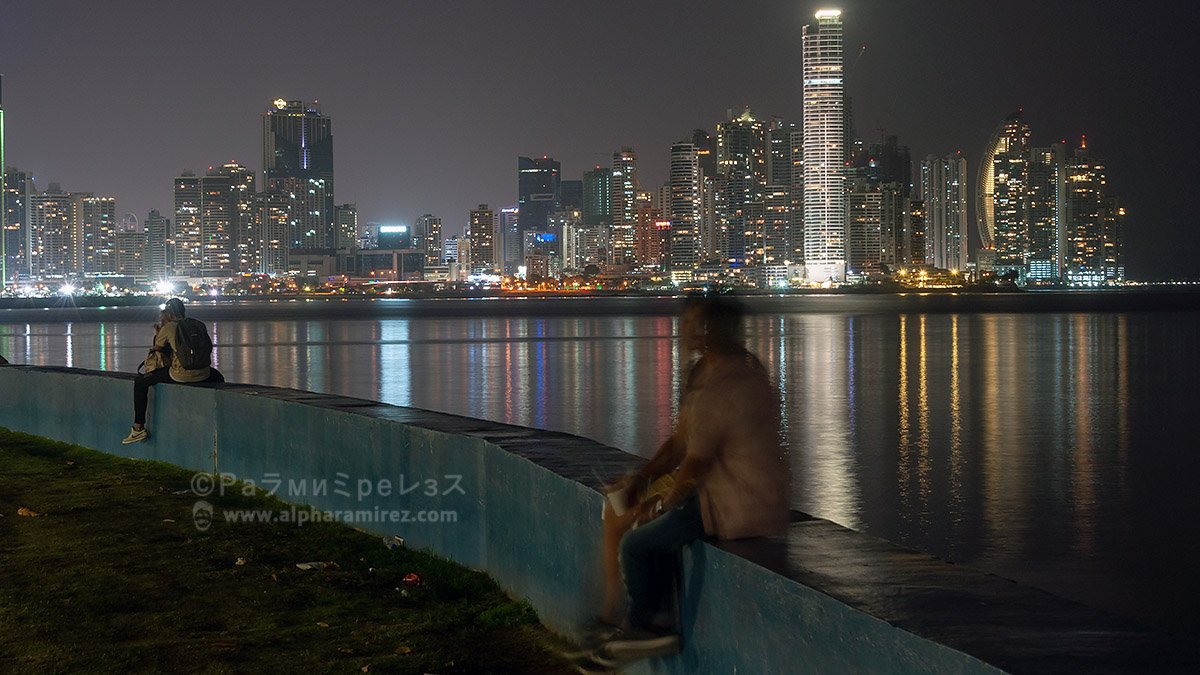 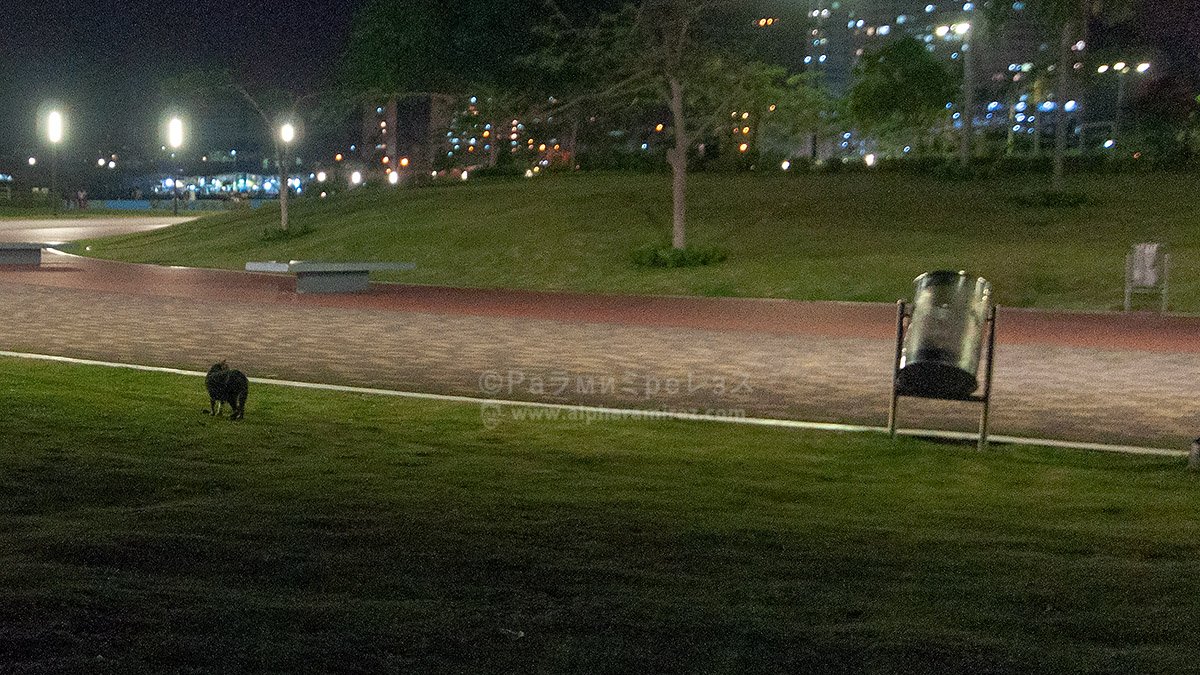 While returning, a Sunday night, there was already a traffic jam. But this time around it was because of a very strong crash.

The crashed car was totalled, I’ve no idea about the driver’s situation.

The weekend had been very successful, with the event and the antics around Panama City and beyond. It was now time to return.

The flight departed a little before 0900 local time. We weren’t very far from Panama Pacifico, but the flight was a Monday morning, a normal working day.

Do you remember the earlier Friday when I arrived, that my friend didn’t want to go to Panama City because of the big arse traffic jam?

Well, now I would have to experiment it. In the beginning I didn’t believe, but if I was going to make it on time for the flight, we would have to leave around 0500. It was more or less 30 kilometres, and I had calculated to arrive between 0700 and 0730.

But my friend knew more about the whole thing, and I believed him. A 0500 leaving time was it, then.

We were on our way to Panama Pacifico a few minutes after 0500, and indeed, it didn’t take long for us to meet the legendary traffic jam. At that time all lanes go in the same direction, but seems to be of little help.

Meaning, all the lanes at that time are in Panama Oeste – Panama City direction, even the ones used for the opposite direction traffic outside of peak hours.

My friend says that when he has to go to Panama City on a working day at those times, he prefers to go ultra early, arrive there, and sleep in the car until the time he has to do his business.

Thing is, we finally arrived, fortunately on time.

We bid our goodbyes, and I proceeded to have my passport checked before departure. The officer said:

He then smiled and left me go. My name is not Andrés Felipe. I was born in April, but not that day, and I’m not wanted by anyone hihihi.

Right after that, they announced the flight was delayed by two hours. When I was in the waiting room the Airplane was just starting engines in Bogotá, the city where it was caming from.

Had to wait then. They gave us a Chilean empanada for the delay… and didn’t come bad huhu.

There in the apron there was a USAF McDonnell-Douglas C-17 Globemaster, and several government Helicopters operating.

The Airplane arrived eventually, it was the same one I had arrived on a few days earlier. It was the HP-1377CMP, a Boeing 737-700.

The passengers from Bogotá quickly disembarked, and soon us going to Medellin were boarding.

The front and aft stairs were used, and everybody just boarded quickly.

This time my seat was on the opposite side of the Airplane, but it was also written with pen. Again, it’s very difficult to do something against chavs, no matter the good intentions of the airline.

We took off then, and soon I had a privileged view of Panama City, the bridge of the Americas, and many places I had visited such as Ancon hill, the old quarter, part of the Marcos A.Gelabert Airport, and other things.

Over the sea, the city got further and further away and disappeared, and I didn’t see any land (nor water) until were descending toward Medellin.

We descended between the mountains, until we turned to fly north again and line ourselves with the José María Córdova airport’s runway.

I passed immigration, and customs didn’t make go to the secondary baggage check. It was indifferent anyway, I didn’t have anything to declare, and wasn’t in a rush.

I left my phone charger in Panama, and I had to coordinate for my friend Rascael to bring it back a couple of weeks after.

Some additional photos of the return flight BLB-MDE: 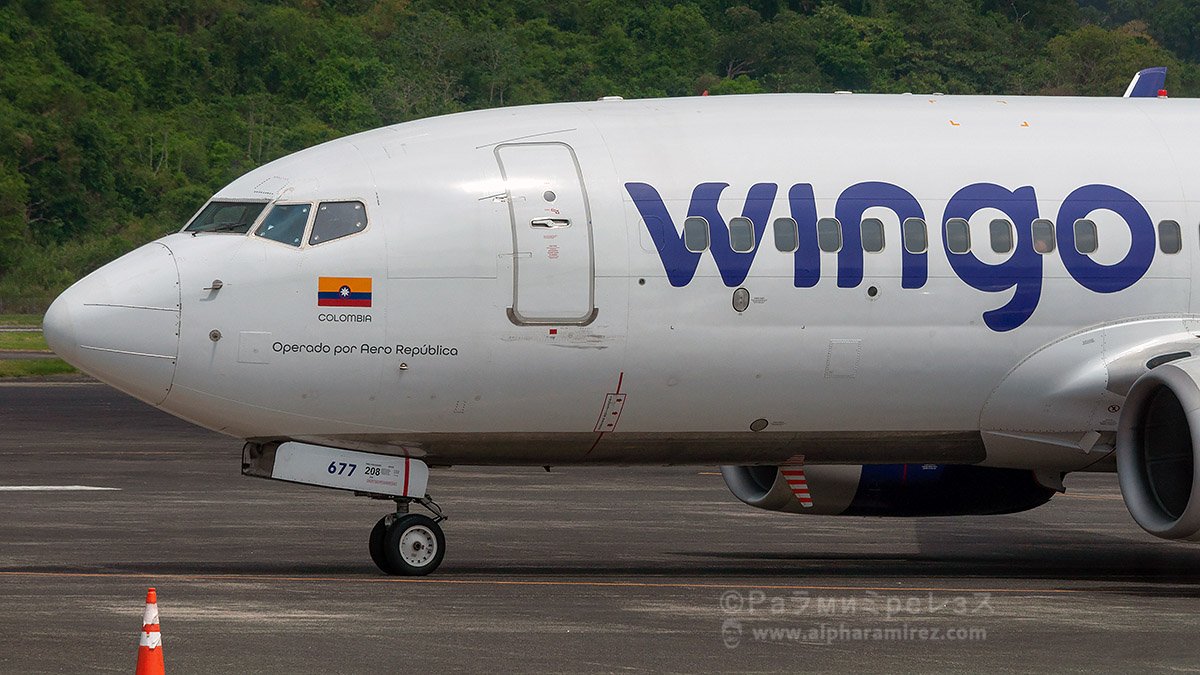 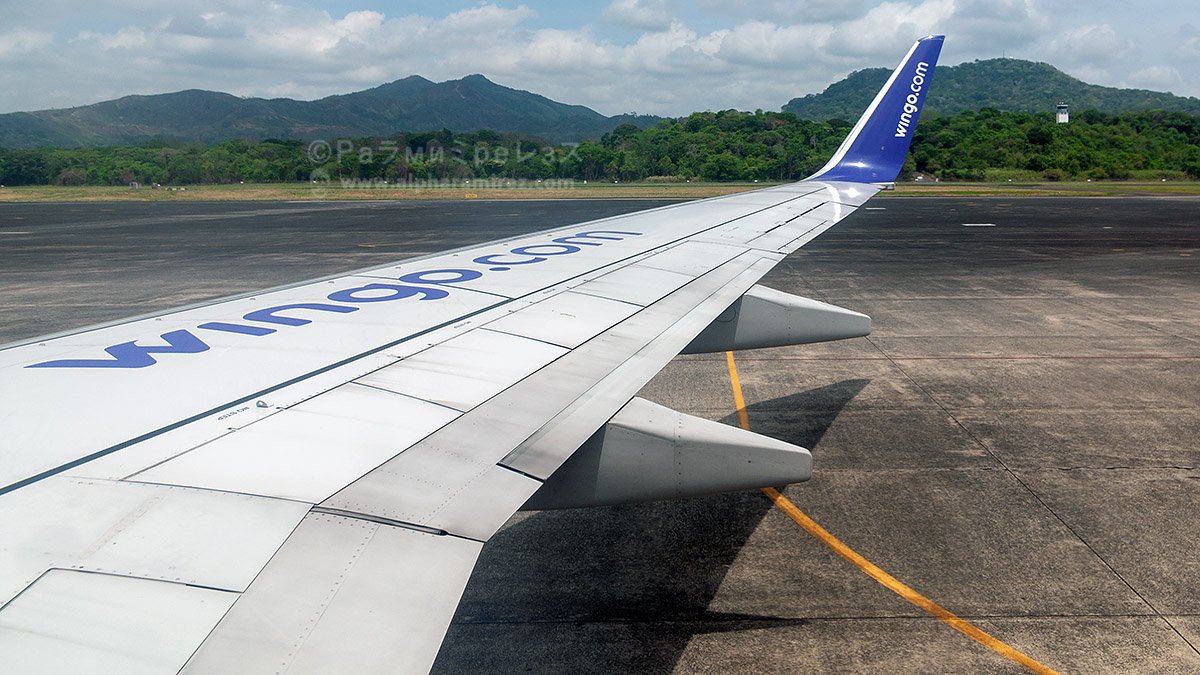 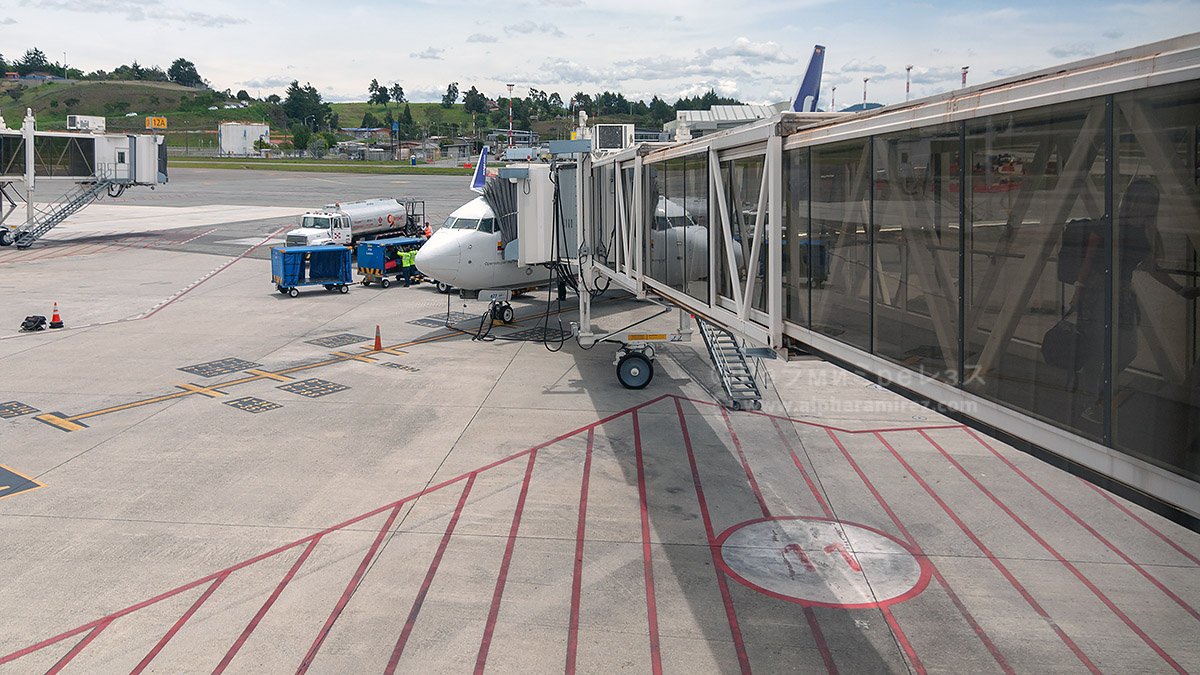 That way, my Panamanian weekend with event had concluded. Possible thanks to a good friend that helped with all the logistics, and a cheap Wingo ticket.

I hope I’m able to repeat it some time.

This Panama City and Tocumen Airport spotting event article is kind of long and thus is divided into three (3) parts. You have just finished reading part three (3). Choose here any other part you may want to go to: | One (1) | Two (2) |

by Ramírez
Next Ramirez